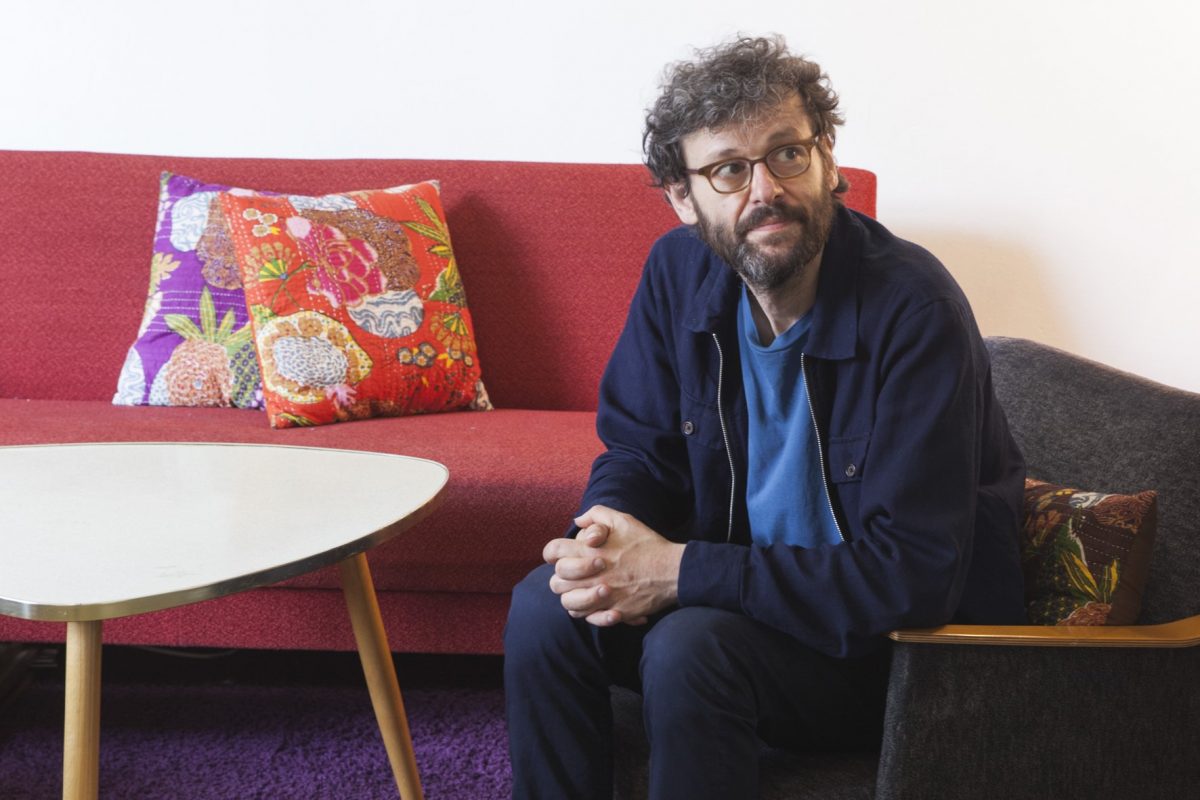 This week Markus Acher released his new solo album “A Beat of Silence” on Morr Music, it’s his second full length album under the synonym “Rayon”. He is known best for his various other projects which deserve articles of their own – however, there is one thing they all have in common: musical sensitiveness, diversity and devotion. In this interview he talks about his motivation and what is yet to come in his musical life.

An interview by Moritz Bouws and Gregor van Dülmen, translated into English by Martin Kulik and Moritz Bouws

Let’s get this straight: „Notwist“ or „The Notwist“? Does it matter?

It really doesn’t – we’re not overly uptight about that. We called us “The Notwist” back when we thought: This sounds like “underground”.

Just for keeping track – could you please list all names of the bands and synonyms under which you performed or released records with?

That’s quite a few. How much time do you spend in studios and rehearsal rooms?

Oh, a lot actually. However, much of the stuff we did in the studio can also be worked from our computers at home now. But of course it’s always invaluable to record together.

What’s the process creating a (The) Notwist album like?

Primarily: really slow. Apart from that, there are different ways in which we make an album. Everyone composes by themselves, then we share ideas, go to the studio together and record, edit the different parts etc. But that’s really an individual process that is very specific to particular songs. Somewhere along this line an idea for the whole record is born that unites all the different parts. That’s really important because otherwise you have nothing to aim for.

“With the labels, concerts, records and fanzines we created an alternative for ourselves – against our reactionary, conservative and catholic surroundings.”

Now that you released “Superheroes, Ghostvillains + Stuff” you are on tour with Notwist again. Your last live album was released 20 years ago, why did you decide to produce a new one now?

The songs for a new published record are really fresh by the time they are released and have not been played live yet most of the time. They are snapshots and evolve with time. We wanted to document these changes in this record. I think some of the songs found their true form only after a long period of time.

What made you choose UT Connewitz in Leipzig as the location for the album? Do you have a special connection to this place?

The audiences in Leipzig and Berlin are always really enthusiastic – we get a kick from that. UT Connewitz is a beautiful location with great organizing staff.

But in the end it was a practical thing as well: We had three days in a row in Leipzig to get everything right. The second day was the best one and that’s the material that you can hear on the record now.

Another really exciting project of yours is 13&God where Notwist collaborates with Themselves, a hip hop combo from Oakland. How did you get together with them?

I was a big Anticon fan. And when Themselves played in Munich we met and discovered our mutual appreciation. We immediately planned a tour together and recorded an album shortly after that.

We hope to come together again this year and do another record. We have become good friends.

Alongside the international tours with Notwist all of the bandmembers are involved in the regional music scene of Bavaria. Is there a big difference for you personally when you play a show in Landsberg or in cities like Seattle or Mexico City?

Of course there is a difference because the audience reacts differently. We want to play internationally and travel the world with our music. But at the same time we appreciate the shows in our hometowns.

You often get categorized as part of the “New Weird Bavaria” movement because of your involvement in the regional music scene. Do you agree with this classification or is it just a label that doesn’t have any significance for your art?

Actually it doesn’t have any significance.

The term also has a political dimension: There is a connotation that the scene tries to show a more diverse picture of Bavaria through forms of art, which isn’t distorted by the populism of conservative politicians like Horst Seehofer. Would agree with that? Does this dimension have any influence on your art?

We always tried to direct our endeavours to the edges of society and we are mostly interested what is considered weird or strange. Our music embodies this view and shows a world that we wished to live in. With the labels, concerts, records and fanzines we created an alternative for ourselves – against our reactionary, conservative and catholic surroundings.

But we didn’t really think about the image of Bavaria. We never saw our roots in that particular place. Our musical role models were other bands in Germany like Mouse on Mars or Can as well as other scenes like those in New Zealand or Glasgow.

„What Notwist is going to be – we don’t really know yet.“

What made you start your solo project Rayon?

Rayon exists since I released a double 7” on Kollaps under that name. I always rekindle the name when I record something by myself.

The new album was produced after Daniel and Karin from the experimental festival Frameless in Munich asked me to record something new. With their programme in mind I composed some songs and finally got around recording it.

The style of “A Beat of Silence” is really spheric but also minimalistic. We are curious in which places the ideas and concepts for the album developed and how this is reflected in the record. Could you give any insight to that?

The actual composing was done at home in front of the computer. But before that I spent a lot of time contemplating on the different ideas. Each song has an abstract idea – rhythm, patterns, overlapping structures – that I expressed in music afterwards. I hoped to achieve an unique structure for each song that differs from the usual musical pattern.

I got a lot of inspiration from visual artists. Agnes Martin, japanese photographers, or the great canadian Michael Dumontier who also made the cover for the album which made me really happy.

An essential part of “A Beat of Silence” consists in the use of indonesian Gamelan Ensembles. Where did you get in contact with those instruments and why were they fitting for this album?

We didn’t use real Gamelan instruments. But the sound and the characteristics of this unique music was a reference point throughout the whole record. You can’t really reproduce those sounds, it’s far too complex.We rather tried to find a certain type of shimmering and hypnotic atmosphere that we really liked about the Gamelan sounds.

When recording as Rayon Markus Acher is not alone: Rayon Band © Johannes Haslinger

When do you decide if a song should be part of a Notwist or a Rayon album?

Most of the time I compose for a specific record or band project. It happens very rarely (like on “Messier Objects”) that two recordings or settings mix up.

On “A Beat of Silence” there is a song that already was released in a different version on the soundtrack album “Messier Objects”. It was titled “Object 16” back then, now “On the Quiet”. Will there be additional versions of this particular song?

I composed this song for the first Rayon concert on the Frameless Festival. That was with a different band cast. After that we created the music to Jette Steckels’ stage play “Das Spiel ist aus” and the song was a good fit there as well. I wanted to record the song again in its raw acoustic form. That’s why it made it to the new album again. I don’t think we will ever record that one again :).

“A Beat of Silence” seems to trace the use of digital music via analogous means. Would you consider this a tendency that is also apparent in Notwist after Martin Gretschmann left the band?

On the Rayon record I only wanted electronic sounds that were generated from acoustic sounds – that was the idea. Distorted and blurred. Take details and magnify them. Like the piles of sand on the cover photo by Michael Dumontier which lose their form and become indistinct. In the end I wanted an unified sound. What Notwist is going to be – we don’t know yet.

“A Beat of Silence” – Cover by Michael Dumontier

So now you will go on tour. But what will be your next project in the studio? Will there be a new studio album after your live album with Notwist? Or will you prioritize other projects?

We definitely plan to make a new Notwist record next. In the very near future there will be the Alien Disko Festival, which we can realize here in Munich at the Kammerspiele on December 2nd and 3rd. We invited some of our favourite ands that burst through genre boundaries.

Of course The Notwist will also be playing.

If you wanna see Markus Acher live before the Alien Disko Festival and somewhere that’s not Munich you can check him out at November 20th at the Berlin Radialsystem V where he plays a release show for “A Beat of Silence”. Just saying.